Off the Kuff
Knowledge Is Good in the Reality-Based Community
Contact me: kuff - at - offthekuff.com
A tale of two cities (and their police departments) 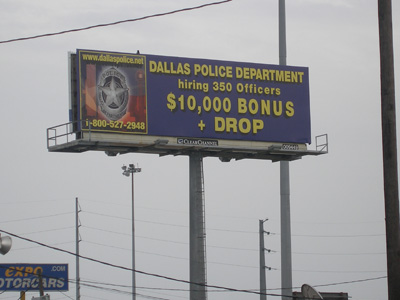 This billboard is located just off 59 between Fountain View and Chimney Rock. It isn't the first time Dallas PD has tried recruiting in Houston, but this is the first time I've noticed the $10,000 bonus. Embarrassing, to say the least, but hopefully the $1 billion+ allocated for public safety next year will do something about our own recruiting woes.

A side-by-side comparison of salaries and benefits for police officers in Houston and Dallas showed why they think they can get away with this. In Dallas, the base pay for police trainees is $41,690 (plus the $10,000 bonus). In Houston, the same trainee would make just $29,164.59. Things even out a little more after that, but being a cop in Dallas doesn't sound too bad - except, of course, the Dallas part.

Edit: Be sure to read the comments for Matt Stiles' explanation of the disparity in salaries. It's not as dismal for Houston as you'd think. Thanks, Matt.

Posted by Alexandria Ragsdale on July 02, 2007 to Crime and Punishment

These figures are a litle misleading, because the police union here years ago decided to push for extra incentive pay, as opposed to higher rates of base pay, in the contract.

There are dozens of incentives, it seems, so a side-by-side comparison isn't quite fair.

Also, officers here reach their rank's max pay more quickly than those in Dallas, thanks to the raise schedule in the contract.

The good openings don't need to advertise, especially outside their service area.

I did notice the incentives, Matt, but the Dallas website was set up differently and I wasn't certain exactly what was comparable to what. Thanks for clarifying.

I'd rather be a policeman in Dallas than in Houston, even if it cost me $10K a year. Houston is far too close to Louisiana, and it smells bad.