Off the Kuff
Knowledge Is Good in the Reality-Based Community
Contact me: kuff - at - offthekuff.com
RIP, Robinson Warehouse

The old Robinson Warehouse, at the corner of Montrose and Allen Parkway, is facing the wrecking ball.


The Aga Khan Foundation purchased just over 11 acres at the corner of Montrose and Allen Parkway to build a Muslim Ismaili center. The group plans to demolish the brick art deco warehouse that's been there since the 1920s.

Zahir Janmohamed, CEO of the Aga Khan Council for the USA, said the site is an ideal location for the Ismaili Centre.

"Allen Parkway has undergone a fair bit of metamorphosis from a development perspective and continues to," he said.

Indeed, several key parcels along the parkway have been redeveloped in recent years. But some of those involved demolishing historic buildings.

The Jefferson Davis Hospital was razed for construction of the Federal Reserve building, and the Gulf Publishing building was torn down for a 33-story residential tower.

The new project will be similar to other Ismaili centers in Vancouver, London and Lisbon.

It will include facilities for lectures and conferences relating to the Aga Khan Development Network as well as for recitals and exhibitions to educate the public about Islam's heritage. The building will also contain a prayer hall, classrooms and offices.

The new property is also expected to have gardens and other green spaces. Still, the design concept and timeline for development have not been determined.

David Bush, director of programs and information for the Greater Houston Preservation Alliance, said the group has seen some of the Aga Khan's other projects and "the designs have been outstanding."

"Even though we regret losing a historic building, at least this time it may be replaced by some truly exceptional architecture," Bush said.

The building at 2323 Allen Parkway opened in 1929 as Houston's first Sears store.

In 1935, floodwaters from Buffalo Bayou swamped the first floor of the store, resulting in a huge flood sale, according to the Greater Houston Preservation Society. The store moved to South Main a few years later.

In the 1940s, the building was the temporary home of Baylor College of Medicine until its Texas Medical Center building was completed.

Arthur Robinson purchased the building in the 1950s for a storage business, the first of its kind in the Houston area and a prelude to today's mini storage facilities, said real estate broker Stan Creech, who sold the property to Ameriton in 2005.

The city's preservation group has had the property on its "endangered" list for many years and has tried to find someone to buy it and renovate it. One suggestion was that a farmer's market occupy the first floor and residential units be built above it, but nothing ever came of that plan.

Bush said the flooding issue made financing a redevelopment of the property extremely difficult.

I saw the beginning of the demolition process as I drove to the Rice football game on Saturday. I went back yesterday and took some pictures of it while I still could. They're beneath the fold.

What this means is that the overhaul of Montrose/Studemont from West Dallas to Washington is in its final stages. With the demolition of the Ed Sacks Waste Paper building, and the new retail center being built at Dallas and Montrose where La Jaliscience (now gone and replaced by Sabor) once had its auxiliary parking, that stretch of road will soon look nothing at all like it did when I first laid eyes on it in the late 80s. In many cases for Houston, that's not a good thing, but here it most definitely is. I can't wait to see the final product, for however long it will last. 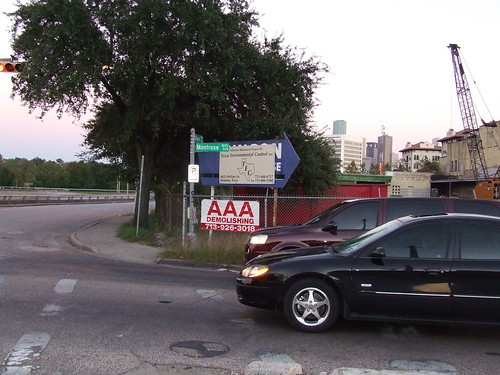 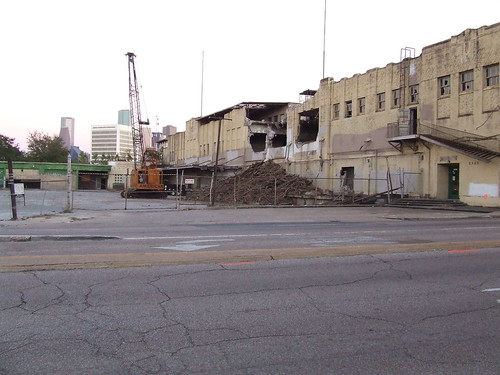 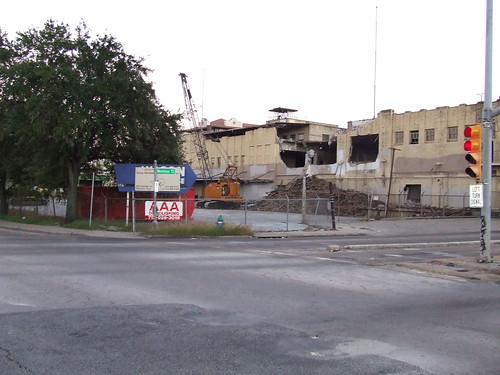 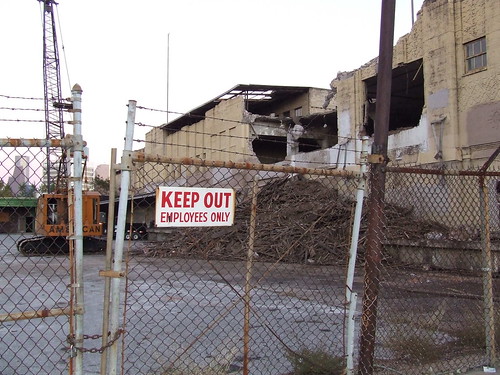 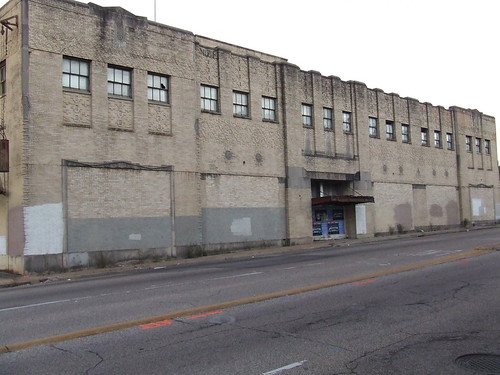 Posted by Charles Kuffner on November 20, 2006 to Elsewhere in Houston | TrackBack

Geez, Will there be nothing left of the Houston I know if I ever return?

La Jaliscience is gone?! The River Oaks Theater and its environs are on Death Row?! Chuck, you gotta gimme some good news about my hometown! There's less and less of the Houston I knew left...

I'm so sorry about La Jaliscience. It vanished without any fanfare a few months ago - I've googled around, and can't find any definitive info on why it disappeared. It's just gone.

I too saw the start of demolition on the Roinson Warehouse and was saddened. The area is changing so fast and seems to be getting so crowded. I miss La Jaliscience too. Call me an old fogie!