Off the Kuff
Knowledge Is Good in the Reality-Based Community
Contact me: kuff - at - offthekuff.com
Under the bili lights

Tiffany called me after I returned home on Sunday night to tell me that Audrey had an elevated bilirubin count, and that she had been placed under the bili light as a result, in order to prevent any serious problems. I'm pleased to say that the therapy has been successful, and that we expect to bring Audrey home later today as originally scheduled. If you've never seen such a thing, as I had not, it's a little strange. Depending on your perspective, you might think of it as a tanning bed or a microwave for infants. Look here and you'll see what I mean: 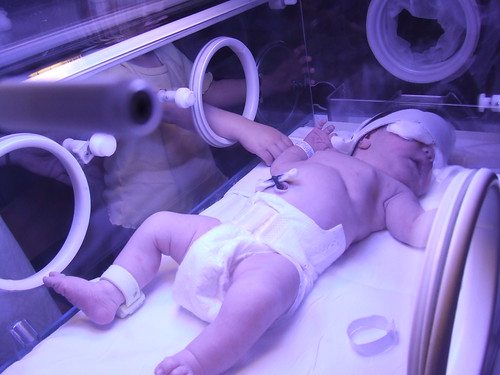 Audrey hated wearing the little eye shades. We had to check her every few minutes to make sure they hadn't slipped off from her constant wriggling and squirming. I told her this would be her last chance to sunbathe without guilt, but that didn't have any effect. 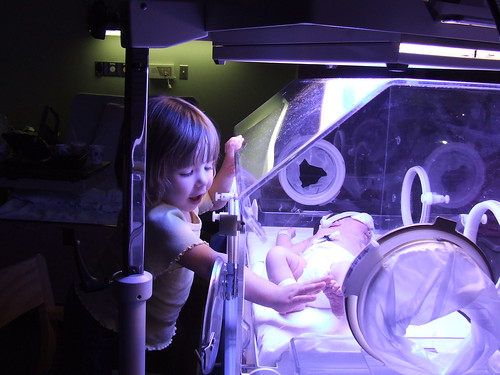 Olivia was fascinated by the bili lights, and insisted on opening the little access windows so she could touch her sister. I can't say enough about how beautifully Olivia has acted around Audrey. She's been a totally sweet big sister, and we are very proud of her. 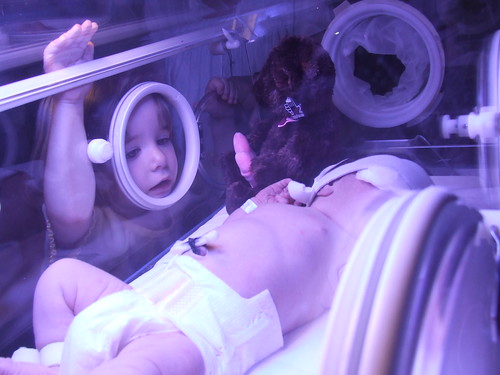 Olivia had received a little teddy bear as a "big sister" present from her aunt Pamela, but she wanted it to be put in with Audrey while we were visiting. Isn't that nice of her?


Today is homecoming, in which we find out just how much crazier things will get with two kids. I can't wait.

Congratulations! You must be proud.

Chuck, the earlier thread apparently ate my comment, so I will reiterate my congratulations.

And with two girls, I give you leave to borrow my shotgun for future date nights.

How exciting! Congratulations to your whole family. Olivia is going to be a great big sister!

Seeing your adorable pictures reminds me of the interplay between my two daughters; one almost four, the other is a year old...

You are really going to treasure the next few years. And congratulations to Olivia for her new-found status as big sister.

I recommend a dvd of the Dora the Explorer episode where she becomes a "big sister" just prepare your mind to melt with incessant "super babies, super babies, goo goo gaa gaa.." Argh it hurts...