Off the Kuff
Knowledge Is Good in the Reality-Based Community
Contact me: kuff - at - offthekuff.com
Construction begins - for real! - at the Ed Sacks site

Back in October, I observed that there was some ground-leveling going on at the old Ed Sacks Waste Paper site on Montrose/Studemont just north of Allen Parkway/Memorial. I thought it meant construction would start real soon. I suppose that's true, if three months later is still considered "soon". Here's what's been going on since roughly mid-January: 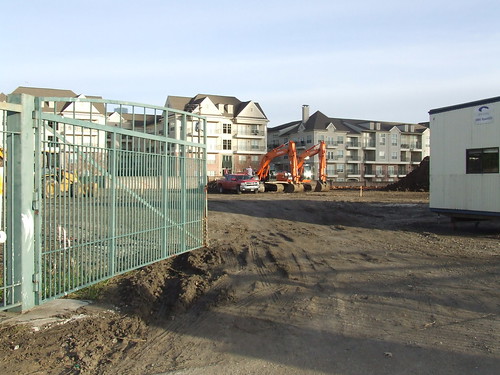 I had assumed this was going to be an extension of the existing Memorial Heights development, but via Swamplot, it turns out it's going to be a bigass apartment tower instead.


Legacy Partners Residential Development Inc. and equity partner CalPERS have cleared the site and are preparing to break ground on their 330-unit Legacy at Memorial. The project, which will exceed $75 million of all-in costs, has 15% of the apartments dedicated for affordable housing.

For what it's worth, the guys building the place have a different name for it.

The grand opening is slated for November of 2009. That's a lot of units in an area that's already pretty dense. I foresee traffic on that stretch of Studemont/Montrose getting quite a bit worse, and now I'm really worried that there will be another stoplight put in at the shared entrance point for Legacy/Memorial Heights, and the Park at Memorial on the other side of Montrose. When is that future rail extension down Washington Avenue supposed to get built again?

Please note, just so we're all clear here, I'm not arguing for an Ashby Highrise-style traffic ordinance here. This is a perfectly fine location for a highrise, and besides I want to see a comprehensive review of how we regulate and approve construction projects, not a case-by-case review. I'm just amazed at how dense the less-than-a-mile stretch of Montrose from West Gray to Washington has become and is still becoming, and I am concerned as someone who drives that way a lot what effect it will ultimately have on traffic. This area has undergone a massive, dramatic change in the last ten years. Who knows what the next ten will bring?

Posted by Charles Kuffner on February 03, 2008 to Elsewhere in Houston

Archstone Memorial Heights (other side of Studemont just south of Washington) is getting ready to start demoing their existing buildings and go to a higher density as well.

You are spot on about the traffic, as it's already bad during the AM/PM rush hours, these two developments will only make it worse.

The kind of attorneys who can pull strings to try to stop developments don't live in apartment complexes. Of course it remains to be seen whether they can actually stop 1717 Bissonnet.

The high-density ordinance is meant to try to stop that one project. If it were meant to stop all similar projects, it would have been the traffic-impact ordinance. Which quite honestly is needed in several areas of the city. Add Montrose and Studemont to the list of thoroughfares being overdeveloped and adding to gridlock.

"For what it's worth, the guys building the place have a different name for it."

"For what it's worth, the guys building the place have a different name for it."

Not according to the developer's website. It is known as 1717 Bissonnet. Not Ashby High Rise or Asbhy Hirise or Ashby anything. The attorney who started the opposition movement apparently decided to call it something else. Probably because he lives on one of the corners on Ashby. And doesn't want to look out on a hirise. He should have checked the plats and deed restrictions. It is unrestricted land. And per the city charter, open to whatever the developer's heart desires.