Off the Kuff
Knowledge Is Good in the Reality-Based Community
Contact me: kuff - at - offthekuff.com
The Kirby construction mural

You've probably noticed the temporary open spaces on Kirby between Alabama and Westheimer, where a number of buildings including the old Page Parkes building, the Fire and Ice restaurant that was once the Hard Rock Cafe, and Jalapeno's Restaurant, have all been torn down pending new high-rise construction. In order the keep things presentable in the interim, a group of artistic entrepreneurs have painted a mural in front of the construction site on the east side of Kirby, where the Parkes used to be.


As many Houstonians will attest, the city always seems to be under construction. And while buildings are going up - or coming down - passersby often are left with unsightly views of cranes, piles of dirt and barricades.

But that won't be the case for the River Oaks condominiums going up at 2727 Kirby. Located at the former spot of the Page Parkes Center of Modeling and Acting, the 30-story high rise is slated to be complete by the fourth quarter of 2008.

Until then, a painted mural, the Kirbyscape Art Wall, will hide the construction site.

"I just thought it would be nice to do something that is aesthetically pleasing," said Mike Atlas, developer and a founding principal of MDA Holdings.

"It gives a taste of what's to come."

Artists from Artist Boat, a Galveston nonprofit, painted the 8 foot by 80 foot wall.

The mural depicts a seasonal landscape with migratory birds that are typical to Houston.

Cara Moore, who designed the mural, said the purpose of Artist Boat is to raise awareness about costal conservation and preservation through the arts and science.

"We are not based in Houston, but we come here a lot," she said. "We have a lot of programs to teach people in Houston how they are related to what happens to the bay and the coast."

Landry said the mural will be an ongoing project that will change from season to season to reflect Houston's natural environment.

With a story like that, how could I resist snapping a few pictures? Click on to see them. 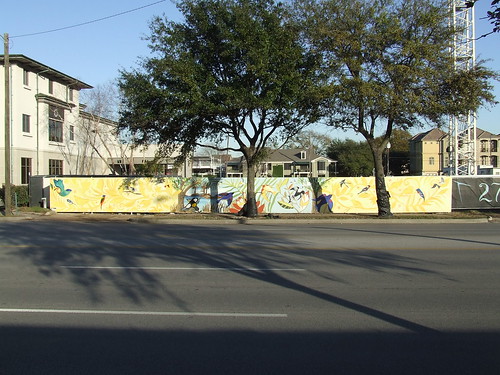 A view of the mural from across the street. Not bad at all. I'll check on it periodically to see when it changes, and take another picture at that time. 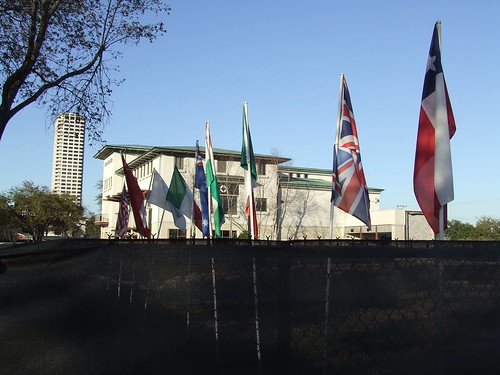 For reasons unclear to me, these flags are all flying inside the construction site. Maybe it's an international consortium, or maybe it symbolizes something, I don't know. Any guesses? 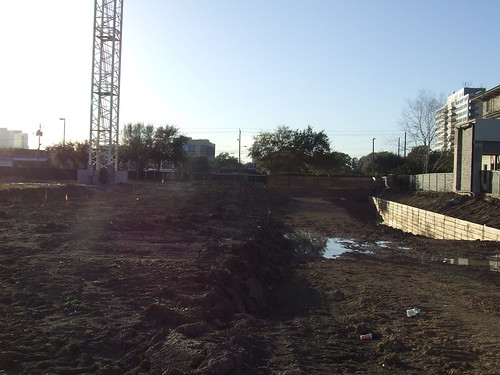 Here's a view of the construction site itself, from around the block (and through the cyclone fence) on Argonne. I can't quite get the whole thing in this shot (the mural is straight ahead, the flags are off to the left), but this is most of it. We'll see what eventually springs up on the site. For more discussion and some pictures, see these two threads on the Houston Architecture Info Forum. Posted by Charles Kuffner on January 09, 2007 to Elsewhere in Houston