Off the Kuff
Knowledge Is Good in the Reality-Based Community
Contact me: kuff - at - offthekuff.com
Robinson Warehouse - The grassy knolls

It's been six weeks since I last checked in on the Robinson Warehouse, and to say the least things look a little different now. 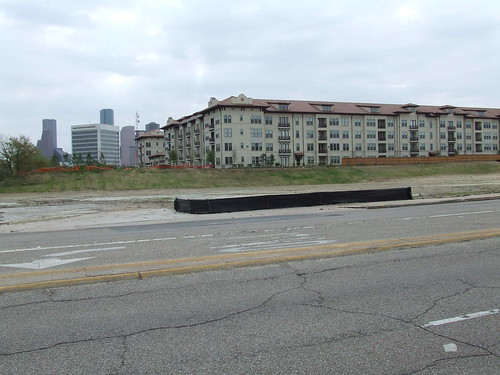 I thought they were beginning construction then, but clearly they were not. They were just getting rid of all remaining concrete, and leveling the ground to a uniform height. They also built these dirt banks, which a week or so ago they sprayed with grass seed. Thanks to the recent rain, the grass is now growing.


As you can tell, there's not a whole lot more of this to see, but I've got two more pictures anyway, from different perspectives. What is clear is that the site is bigger than it was when the warehouse was standing. It stretches to the north past where the loading dock on that side was. What's not clear is when construction will begin, or why the grass was planted before construction began. For now, it's just a big, empty lot, one where you'd never have guessed what used to be there. When something changes, I'll be back to take more pictures.

Posted by Charles Kuffner on March 20, 2007 to Elsewhere in Houston

The fact that we haven't seen any designs for the new center indicates they probably aren't far along. According to the Chron in November:

"The new property is also expected to have gardens and other green spaces. Still, the design concept and timeline for development have not been determined."

Design and permiting for such a major building would take 6 months for an extremely fast track project, and several times that for a typical project schedule.

My guess: you won't need your camera at that corner for quite a while.