Off the Kuff
Knowledge Is Good in the Reality-Based Community
Contact me: kuff - at - offthekuff.com
If not you, then who? 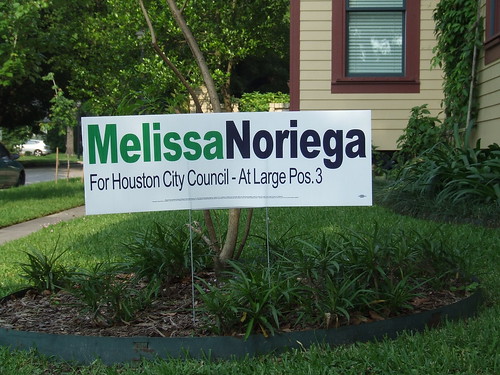 Through Friday, just under 24,000 people had voted in Harris County (PDF). That includes other city elections, like Pasadena and Deer Park, various school board elections, and the constitutional amendment. It does not include the weekend, which might have added another 5000 ballots or so. Counting today and tomorrow, I'd guess we'll wind up with about 35,000 early votes being cast, which suggests about 80,000 total votes. If that were city of Houston only, it would mean that the County Clerk estimate of eight percent turnout was accurate. Since it isn't just city of Houston, I'll stand by my projection of five percent.

Which makes your vote worth that of twenty people. Assuming you cast it, of course. If you don't, well, what other nineteen people will you be lumped in with?

Early voting concludes tomorrow. You have from 7 AM till 7 PM today and tomorrow to vote early, at one of these locations. After that, Election Day is May 12. Please don't miss out.

We voted Sunday; there were maybe 30 voting machines at the Downtown early voting site and we were the only two voters there.

I told Melissa I would vote for her if she voted for me. She appreciated the humor, but we ended up voting for ourselves.

Thanks for the good work you've done covering this terribly uncovered race. There is something to be said for the fact that many bloggers pick up the slack from regular journalists.