Off the Kuff
Knowledge Is Good in the Reality-Based Community
Contact me: kuff - at - offthekuff.com
Philosophical Questions Department

The following was on the marquee at Jimmy's Ice House near White Oak and Studewood this week. Which would you rather be? 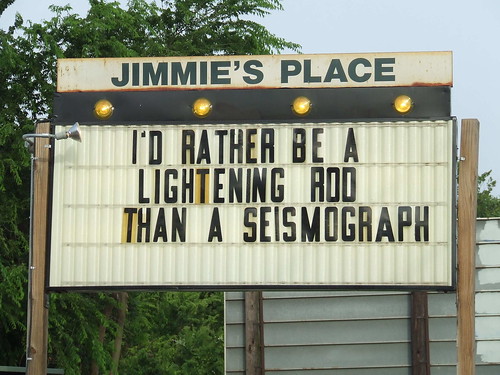 Yes, yes, ignore the spelling error. I'm thinking that since the job of a lightning rod is to get hit by lightning, whereas a seismograph in Houston can measure an earthquake in Tokyo, I'd rather be the latter. But maybe this is about wanting to be a part of the action. You know the old joke about a plate of ham and eggs (the chicken was involved, but the pig was committed); maybe this is a statement about the lightning rod's level of commitment. Maybe. All the same, I'll still be the seismograph. What do you think?
Posted by Charles Kuffner on July 01, 2007 to Elsewhere in Houston

I'd rather be a lightning rod
because i dont want to be measuring other people insecurities, expectations,
needs,hopes,levels of murcury poisoning,etc etc,etc. If i'm a lightning rod and attract lightening and get hit by it so be it.