Off the Kuff
Knowledge Is Good in the Reality-Based Community
Contact me: kuff - at - offthekuff.com
Photos from the River Oaks Shopping Center demolition

Didn't get a chance to get to this yesterday... 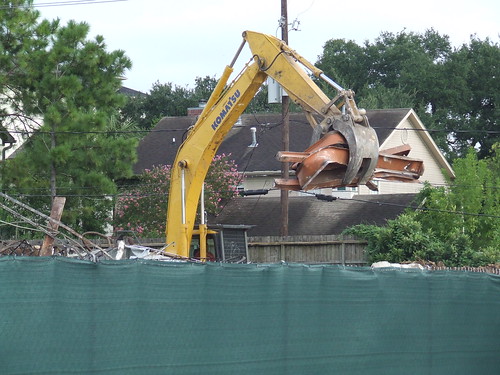 I took a few photos of the ongoing demolition at the River Oaks Shopping Center yesterday. The one above is my favorite - kinda looks like a mechanical dinosaur having a little snack, doesn't it? I've put them into this Flickr set, and will add any subsequent pix there.


In the end, this portion of the River Oaks Shopping Center by itself isn't all that important. The cool architectural features are further down West Gray; this end of the center isn't particularly distinguished. What's troubling about this is what it means for the stuff that really is cool and unique and historic. When that new Barnes & Noble is finished, there will be three big bookstores within about two miles of each other - this B&N, the Alabama Bookstop, and the Borders at Alabama and Kirby. I have a hard time believing that even a fairly affluent area like this can support all three of them. If that's true, then it's clear who's the odd man out, and it ain't the big chain stores. That's what people are upset about, and that's why I will not shop at the West Gray Barnes & Noble. Anything I can do to make this decision harder for Weingarten is a good thing.

And of course, there's the eventual fate of the River Oaks Theater, whose lifespan already doesn't appear to extend beyond 2009. I figure there will be some collateral damage as well - it seems to me that any chichi highrise Weingarten might want to build on that spot would mean the death of places like Marfreless, too. Do these things matter to do? Which Houston would you prefer, one that has these existing places, or one that loses them in favor of another generic development? It's no contest from my perspective.

Posted by Charles Kuffner on September 07, 2007 to Elsewhere in Houston

Charles, I believe you are wrong. You are implying that BookStop is an indepedent store, and that it would compete with the new B&N. Not so. BookStop is owned by B&N, and if they build a new B&N at West Gray, they will certainly close BookStop.

The BookStop chain was purchased by B&N years ago. The only thing that is "BookStop" about it is the name--the store interior and management are 100% B&N.

My understanding, however, is that B&N wants a bigger footprint than the old Alabama Theater space can provide. So Weingarten is willing to destroy some architecturally significant buildings to please an important client.

RWB - I'm aware that the Bookstop is a B&N property. My point, and I think you agree with this, is that the existence of the new B&N is intended to make the Bookstop obsolete and unprofitable, which then clears the path for Weingarten to do as it pleases. B&N has responsibility for this, which is one reason why I will not shop at the new location - I hope to prove them wrong in their assumptions.

Charles, if you and others think the Bookstop building is so great and a profitable business could be run from that location, get your money together and make B&N a monetary offer they can't refuse. It's not your property, buy it and you can do whatever you want with the place.

RL - Weingarten (and B&N) are of course free to do what they want with their property. Nobody is saying otherwise. But I and others are equally free to base our purchasing decisions in part on their actions. As is the case with any business in a free-market economy, if they do something to displease their customer base, they should expect there to be consequences.

Does that mean that what I and others who care about preservation will have a noticeable effect on their businesses? Maybe, but very likely not. Some people would rather have the new B&N and whatever other foo-foo development they have in mind, and many people don't know or don't care about what's going on. All we can do is say our piece and hope enough people listen.

Charles, if you and others think the Bookstop building is so great and a profitable business could be run from that location, get your money together and make B&N a monetary offer they can't refuse. It's not your property, buy it and you can do whatever you want with the place.

If the old facility isn't turning a profit then making it bigger isn't going to help. Any bets that the new store will be abandoned after the theater is levelled? That's how it works in my neighborhood.

As I've said before (and still believe), it's true that Weingarten can do what it likes with its property - I just hoped they would have more of a sense of stewardship than they apparently do. The River Oaks Shopping Center is an important piece of architecture both locally and nationally, and in a couple of years, it'll be gone. The price of "progress," I guess.