Off the Kuff
Knowledge Is Good in the Reality-Based Community
Contact me: kuff - at - offthekuff.com
Allen House: Getting ready to go away

I've noted before that the Allen House Apartments are not long for this world. While there's been a construction fence around the property for several weeks now, you can't really tell how close they are to meeting their doom from Allen Parkway. But drive down West Dallas, and it's clear that their days are numbered, and that number isn't big: 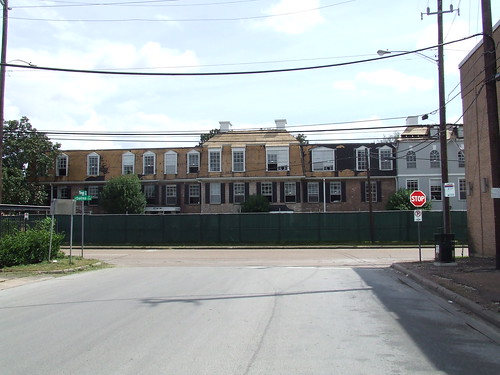 I've got more pictures in this Flickr set. While most of the buildings in this complex look more or less like what you see there, there's one section, on the south side of Dallas east of Dunlavy, that still appears to be inhabited. But it too sports a sign announcing a request for variance, so it will apparently follow its neighbors soon enough. Progress, such as it is, marches ever onward.
Posted by Charles Kuffner on September 15, 2007 to Elsewhere in Houston

Thanks for sharing this.

They were my first temporary apartments when I worked summers in Houston.

Oak Lane Apartments, the first ones I lived in when I moved back are no longer too.