Off the Kuff
Knowledge Is Good in the Reality-Based Community
Contact me: kuff - at - offthekuff.com
"Get Ashby High"

This is the best comment I've seen on the Bissonnet high rise situation: 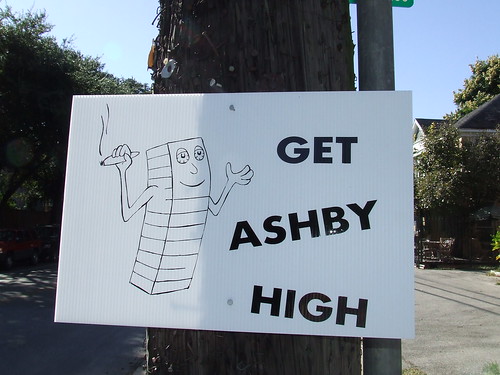 If you've seen one of the ubiquitous yard signs in the area, you'll get the joke. This sign was on a telephone pole at Shepherd and Bissonnet. I'd seen one or two more a couple of days ago, but didn't have a chance to snap a pic.


In other news, I've heard that a disconnect permit for 1717 Bissonnet has been granted, so there may be some work starting soon. Stop Ashby High Rise has a letter from Council Member Clutterbuck with an update on the situation. And last week's West U Examiner responds to the response to their story about the Southampton Civic Club knowing about this in 2005, and provides further information about who knew what when.


An application for storm drainage use at the corner of Ashby and Bissonnet streets was received Nov. 21, 2006 by the city of Houston, pertaining to a project that would include 210 apartments, 10,000 feet of office space and a full-service restaurant.

Records obtained by the Examiner through an Open Records request contained a letter from the Public Works Department -- dated Dec. 9, 2006 -- responding to the request by Maryland Manor Associates and addressed to the attention of developer Matthew Morgan.

In an e-mail Friday, the Southampton Civic Club reminded its members that a September 2005 newsletter had alerted them to the possibility of a high-rise replacing Maryland Manor apartments, but said an investigation of reported survey work at the site "yielded nothing."

It went on to say "the issue did not surface again until the early March of 2007 when another survey crew was observed at the site, although it is unclear if their presence was related to the Maryland Manor site or another neighboring property."

The full text can be seen at www.southamptoncivicclub.org/newsletters by clicking on Late Summer 2005 and scrolling to Page 5.

The article said the Civic Club had made "preliminary contact" with the city about the possibility of a high-rise at the site. "We will keep you posted," it concluded.

UPDATE: See also this Q&A with the developers, and this editorial response by the Examiner, which Michael Reed emailed to me:


Still, what appeared on Page 5 of a Civic Club newsletter more than two years ago has very little to do with why the Examiner story was written or -- more importantly -- who it was addressing.

For at least a couple of weeks prior to the article's appearance, television news viewers and readers of larger newspapers than our own have been treated to -- in their minds -- the antics of very rich people throwing hissy fits in an elementary school gymnasium and marching hippie-style along Bissonnet Street.

Most of these viewers/readers have seen or read comments on more than one occasion from someone who lives in the immediate area of the project.

Comments that contained words like "caught off guard," "shocked" or "dumbstruck" when referring to how they felt after hearing of the proposed high-rise only recently.

This has been the rule, rather than the exception.

Veteran journalist Michael Reed was handed some e-mails sent among members of the Southampton Civic Club legal committee back in 2005 that plainly pointed out that not everyone should have been all that "dumbstruck."

("Handed" as in "placed in his hand" is the correct terminology here. The Civic Club's preferred usage of "leaked" in its description implies the source gave the Examiner something that was not his/hers to give.)

The Examiner story implies nothing. It states some residents of Southampton knew of the threat of a high-rise at the Maryland Manor site in 2005. And, the ones that we know for certain were aware of that threat were "ranking members of the Southampton Civic Club."

Posted by Charles Kuffner on October 26, 2007 to Elsewhere in Houston

The old adage about "Oh, what a tangled web we weave" comes to mind. As does what goes around, comes around. And sometimes it goes up, too!