Off the Kuff
Knowledge Is Good in the Reality-Based Community
Contact me: kuff - at - offthekuff.com
Sarnoff on the Heights Highrise

The Chron's Nancy Sarnoff writes about the Heights highrise, and makes it sound pretty reasonable.


[C]alling it another Ashby high-rise may be a stretch.

For one, the proposal is for an office building.

And the rendering is old. A newer plan is being considered with only nine stories -- six levels for office and three for parking, according to Tim Cisneros, the building's architect.

The developer hasn't even gone to the city for a construction permit.

"We're just looking at who's interested in doing the deal with us," said Ed Rizk, a real estate broker and developer who's pre-leasing the building.

Those involved in the project said there's a need for office space in the Heights, where area businesses operate out of rundown strip centers, outdated office structures and historic homes.

"The options for Class A office space in the Heights are virtually nil," said Cisneros, who sees the market as small law firms, accountants, architects and other small businesses whose owners live in the Heights.

Residential units were, however, considered for the site.

But condos would generate a lot more traffic than an office building operating just during business hours.

And a shopping center would require loads of parking.

"We're trying to envision if it's an appropriate building type," Cisneros said.

It's still not clear to me that there's that much demand for office space in the Heights, but whatever. I still think nine stories is a bit on the tall side for the area, but as I said before, beyond that there's not much to object to.


The proposed office building would be built on a 25,000-square-foot parcel at 3110 White Oak, just west of the popular Onion Creek restaurant and bar.

It would replace a house and small shopping center and could contain 50,000 square feet of office space and just enough ground-level retail space to support a bank or restaurant.

Land owner and developer Geoffrey Vaughan couldn't be reached, but his architect thinks the project could serve as an example for acceptable urban development.

"But I think maybe it could sensitively set the model for some development patterns in Houston."

I took a couple of photos of the lot where the highrise would be. Here they are: 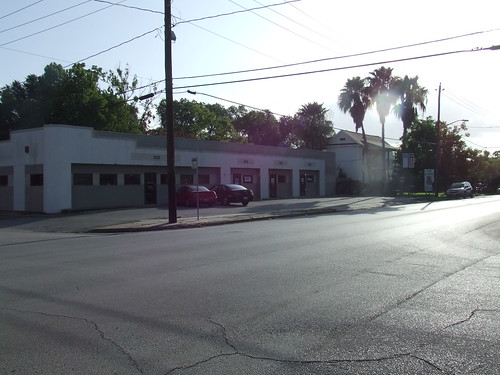 You can see the entire space from this view. Onion Creek is just on the other side of that telephone pole on the far right. 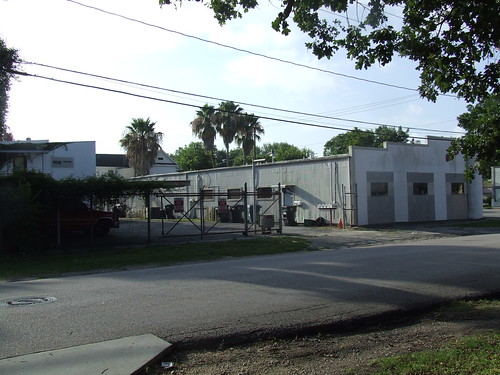 A view from Oxford, the crossroad immediately to the west of the lot. It's not very deep, which is why a lot of people were puzzled by this at first. Between this new development and the presence of Onion Creek, I can foresee a traffic light at this intersection sometime in the future. Note the lack of sidewalks on Oxford, which will be an impediment to anyone who wants to walk to this new building. 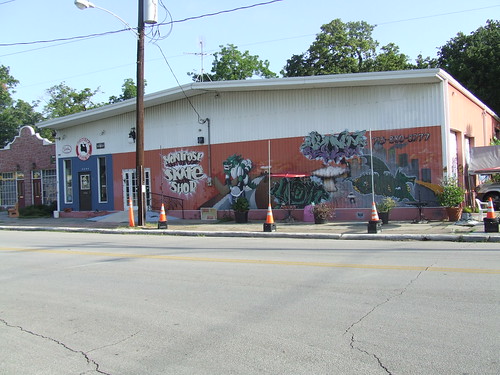 The misnamed Montrose Skate Shop, on the other side of Oxford, will be the highrise's other neighbor on White Oak.

Barring any new information, I don't think there's much more to say about this until such time as permits start getting pulled, and the neighborhood reacts. In the end, I think it won't be too contentious, but let's see what the specifics are before we get too confident.

Posted by Charles Kuffner on June 30, 2008 to Elsewhere in Houston

Wow, yet another reason I'm glad I didn't buy that house on Oxford back in the day.

Guess I'm a bit of a NIMBY on this. We've got so called "office space" still unused on Heights Blvd, etc. As for businesses running out of a home, what motivation will this be money-wise for them to move?

Any word from your neighbor Tim Cisneros over there (he lives on the north side of Omar, the second house from Reagan) about whether or not there would be shops and/or restaurants on the first floor of this building? I think that would go a long way to making this thing acceptable to the neighborhood, if anything does.