Off the Kuff
Knowledge Is Good in the Reality-Based Community
Contact me: kuff - at - offthekuff.com
Netroots Nation, day 3

I thought our panel went pretty well yesterday. It was well attended given its local appeal, and we got a number of good questions from the audience. We panelists - Vince, Matt, Boadicea and I - hardly let our poor moderator, Brian Hamon of Eye on Williamson get a word in edgewise. We talked a lot about the politics of the Legislature, and how a lot of the bad policy choices the Republicans have made in recent sessions have left them on the brink of losing control of a chamber they once dominated. All these panels have been video recorded, so I assume it's online somewhere; if I can find the linkage, I'll post it.

Much as I've enjoyed attending and participating in these panels, I think I've enjoyed meeting and talking to people in the halls and after panels even more. I've met quite a few bloggers that I've read for a long time - Atrios, Ezra Klein, Jesse Taylor, Digby, and Kos himself, to name several - and a number of people who read my blog. It's a cliche to say that it's nice to put faces to names, or to disembodied pixels as the case may be, but it's also true. Meeting the folks who make up the community makes the experience better, and I have really enjoy the opportunity to do it.

The presence of the RightOnline conference going on nearby has generated some interest among the reporters here. The Chron's RG Ratcliffe did a little video interview with some participants in NN and RO, including Rick Noriega, Peggy Venable, Matt Bramanti, and me. Note how Bramanti identifies the same reason why progressives are out in front of online organizing as I did. Whoever said the left and the right couldn't agree on stuff? And Forrest Wilder of the Texas Observer catches an awkward question during a panel on media bashing "Understanding and Critiquing the Old Media". You never do know who's listening in, do you?

I promised some photos from the kickoff party Thursday night. They were taken at night with a flash from about fifteen feet away, so most of them aren't worth publishing. About the only one worth showing is Gen. Clark introducing Rick Noriega: 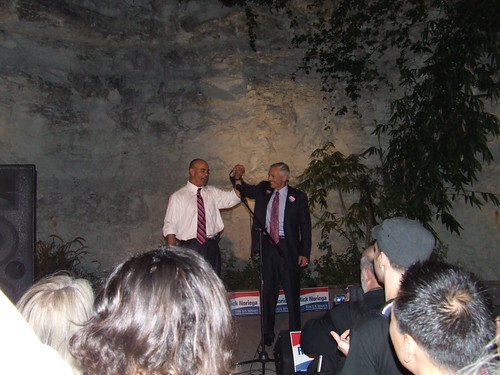 Here's a much better photo, of something a little different. When I arrived back at our friends' house last night, after an enthusiastic greeting from the girls, Olivia informed me that she and Audrey had been working on an art project that day. She led me over to the table where they were, and showed me their labors: 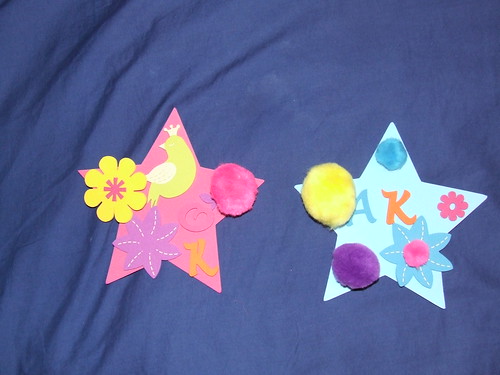 And that would be why I didn't go to any parties Friday night. As much fun as NN has been, that was better.


Oh, and in case anyone is curious: I managed to not oversleep this morning. So, I should be there at 8:30 to find out who the "special guest" is that people have been hyping. I'll update when I learn the identity.

I have the one Olivia gave me on my desk. They were very cute.