Off the Kuff
Knowledge Is Good in the Reality-Based Community
Contact me: kuff - at - offthekuff.com
Regent Square, coming soon (maybe)

Hair Balls updates us on Regent Square, the development that will eventually replace the departed Allen House.

There's the "recordation" of the plat, for one.

"I've seen [developers take] two to three weeks between final approval and recordation, or it could be a year before recordation," she tells Hair Balls. "Sometimes it's quick and sometimes it's slow; it just depends on what the developer wants to do."

A spokesman for the Boston-based GID Urban Development Group, says groundbreaking is scheduled for November.

We'll see how close they come to that. Here's a reminder that things don't always go as planned: 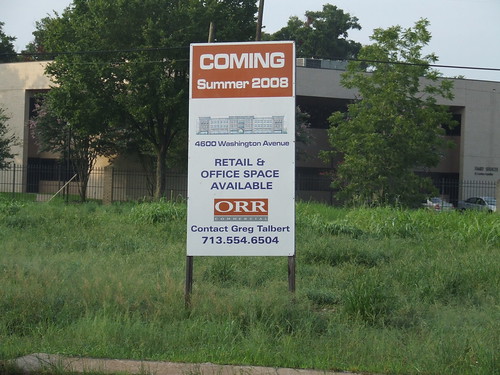 The summers are long around here, but they're not long enough to make that sign come true.

For what it's worth, by my count Allen House was all gone as of last October, so if they do break ground in November this year, they'll have gone from demo to pouring concrete in 13 months. Given that the Robinson Warehouse was fully disappeared by March 2007, that the Sonoma site was demolished in October and is now in financial limbo, and that the Ed Sacks site was fallow between January 2006 and October 2007, that's not too shabby.

Posted by Charles Kuffner on August 22, 2008 to Elsewhere in Houston

I was noticing how built up that area is right now. I know Houston isn't nearly as overbuilt as some parts of the world, but I can imagine they're having problems with real estate/construction financing right now, and the number of new apartments and condos nearby can't help with that.