Off the Kuff
Knowledge Is Good in the Reality-Based Community
Contact me: kuff - at - offthekuff.com
The Stables: Gone but not (yet) forgotten

Last week, The Stables was torn down. Remember what it used to look like? Well, this is what it looks like now: 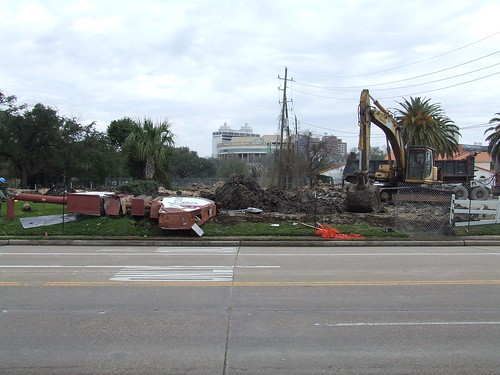 Sad, isn't it? And see the marquee, now lying forlornly on the grass? Here's its fate: 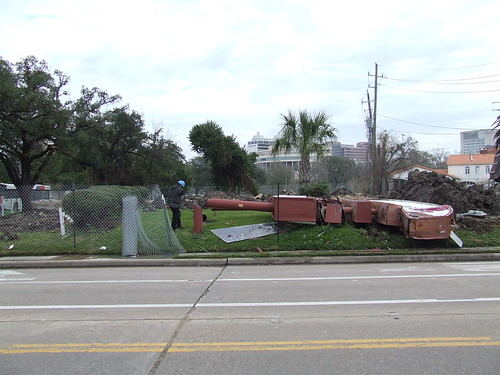 I wish I'd gotten a shot of the blowtorch in action, because its flame was most impressive, but alas I missed it. 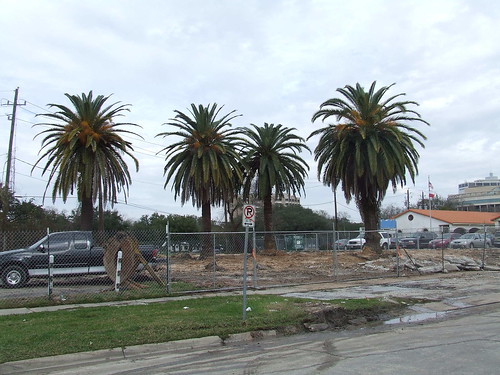 I hadn't really noticed the palm trees before the demolition, but they're pretty obvious now. I can't imagine they'll still be there when the eventual high rise gets built, but maybe they were saved from the bulldozer to be moved elsewhere. If that's even possible, that is. I'll keep an eye on them.

UPDATE: Drove past it this morning, and the sign was gone. If that's not Houston in a nutshell, I don't know what is.

That sign was in small pieces when I passed by shortly after 5pm yesterday.

And when I drove north past the Robinson warehouse site, there were many trucks and workmen who, having smoothed over the south end of the lot, were now eyeing the hole in the ground. A small crane was abusing the stob of a tree close to the road, intent on making it go away.

Made me feel sad.

I ate a number of steaks over the years at the Stables. I remember my first meal there was when I was 9 years old. On that occasion I was the guest of "Coach Charlie" (he was a prince of a guy - he'd take us out every now and again so we'd learn how to behave at a real restaurant). I always thought of that experience as I passed by the restaurant over the years while using my favorite shortcut (Morningside) to get to the Astrodome. It's sobering to see monuments of my lifetime passing away.

I was in Houston just this past week and looked for The Stables, not knowing it had already joined the old Red Lion. Damn. Saw a new building in the Med Center, saw that the old strip mall near Rice was torn down, couldn't even tell my wife what a couple of buildings on the Rice campus were, and didn't even know that the MFA had a brand new building. Too many changes in my old hometown for this grumpy old man....